Head of Diversity and Inclusion
Mizuho

What thoughts and actions come to mind after hearing our second group of presenters? 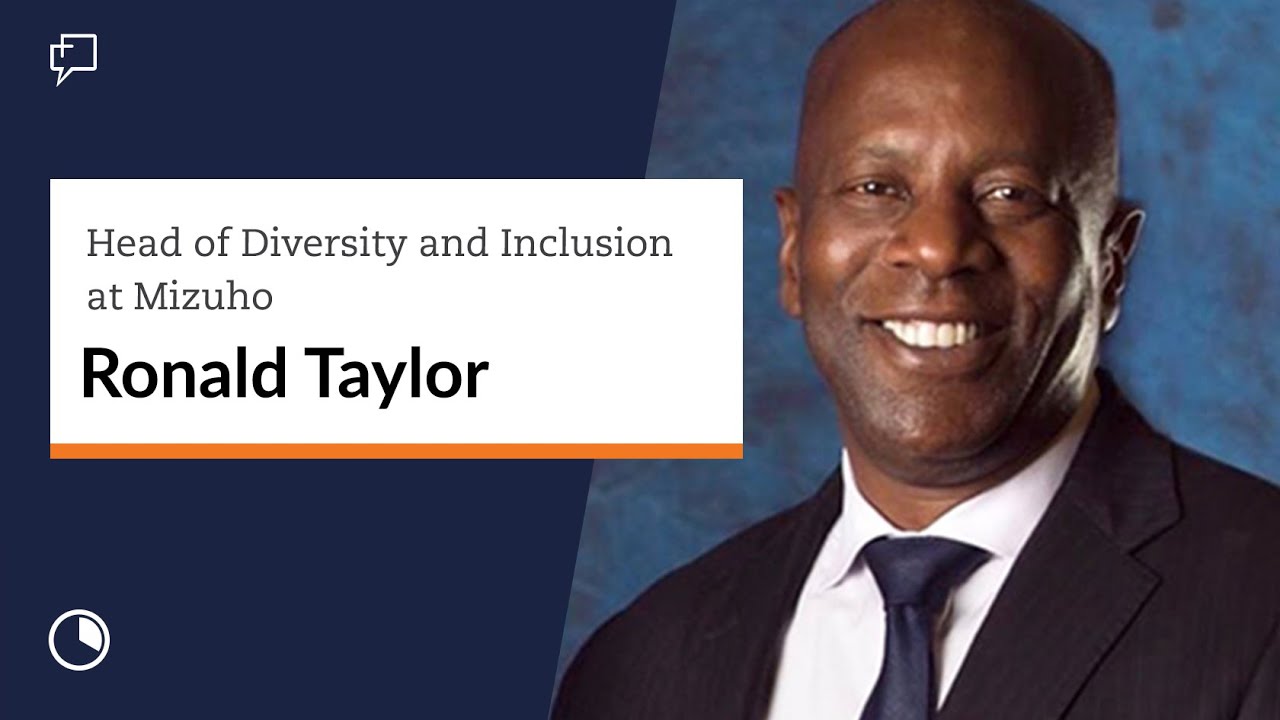 Ronald Taylor, Head of Diversity and Inclusion at Mizuho, has been having the same conversations about diversity and inclusion for over 20 years. Amid a surge of interest in hiring for D&I, he shares advice with new CDOs on how to ensure that the company they represent is in it for the right reasons.

Any remarks I make today are going to be my own, do not necessarily represent Mizuho Americas or Mizuho Financial Group. I think today of all days, I need to make sure that I make that disclaimer, because I'm tired. I am exhausted. The decision yesterday has just got me reeling. I appreciate that you guys are doing this and that you're putting this platform and that you're giving us this voice, but coming off of things like what we just got yesterday just got me reeling.

If you had told me 20 years ago I'd still be doing this when I intentionally moved into this space 20 years ago, that I would still be having these exact same conversations, I would have laughed at you. I thought this was going to be a quick run. We had some of the smartest people working on this stuff. We were going to get this fixed and we were going to move on to bigger and better things.

Well, we're still here and there's a reason we're still here. I know one of the speakers talked on microaggressions and unconscious bias, and all the things that we get cerebrally, we get it academically, but we haven't made any real input or movement in that space. We're not addressing the elephants in the room. You have the CEO of Wells Fargo that says, well, there's no talent out there. We just can't find them. Elephant in the room, right there. You're leaning into a bias that you need to pack up and throw away.

But let me get back on point. Practices, for new CDOs. I was just on LinkedIn. I was looking and there were 20 plus positions for Chief Diversity Officers on LinkedIn. That's one of the things I was doing as we were going into this. Some of those companies, I've never heard of, some of those companies, we say they have gotten woke. I don't know if they've gotten woke. I think they've gotten scared. Now, all of a sudden, this is something that they need. So, if you're a new CDO, before you even go into a role, I would say, just kick the tires, make sure it's not performative. Make sure it's real that these companies want this for the right reasons, not because they feel like they're falling behind or they're losing market share or whatever. Make sure it's the right reason.

You're going to do that by having seriously bold conversations with the folks that you're talking to. If it's performative, stay away from it, unless that's what you're into. If you want to take half a million dollars to go and sit and be the guy who sits by the door. I was going to reference one of my favorite books from the seventies, the Spook Who Sat by the Door, but I'm not going to say that. Go ahead, but stay away from me if that's your attitude. If you just want to take the money and make sure that people are comfortable and people are feeling good, do that, but stay away from me because that's not why I'm in this war.

If you want to join a company that's authentic, then go in and really challenge that leadership. Challenge them with your questions. The interview is a two way interview. So, you're asking them, you want to make sure you're going someplace where you're going to be successful with something that you're passionate about. Challenge the heck out of that leadership. If they tell you they've got all the answers and we just need you to come in here and we'll call you when we need you, be careful. But if they come in and they say, “We need help. We don't know what we don't know. We don't know how to fix this. We don't know what we're missing. We want you to come in with your levels of expertise or whatever it is, and we want you to help us do that.” Then make sure that they're really at the table with you.

I've been with Mizuho now for two and a half months. I came over because I did hear, through a lot of those leadership conversations, exactly what I needed to hear from that leadership. A true commitment of vulnerability, things that I really needed to hear to know, okay, we can work on this together. One correction I've made over the last two months has really been, a lot of folks are like: “We're so glad you're here. You're going to make this better.” My pushback to all of them is, I'm so glad you're here because we're going to make this better. This isn't a one person, one stop shop where, again, Ron Taylor is going to come in and fix this organization or any organization.I think it's important that everybody knows that they have skin in this game and that everybody knows they have a right during these conversations around diversity and inclusion. So, three sleepless nights, after watching eight minutes and 46 seconds of... I'm still not sure of what I saw. I saw a murder.

I wrote something and I've been sharing this and socializing this. I want to share it now, and it's about rights. George Floyd didn't get rights.He didn't get his rights in that situation. George Floyd was murdered on a media forum and everybody got to see that. I really started thinking about what are the rights as they relate to this conversation, in corporate, around diversity and inclusion. A lot of the old rules around talking about diversity, and race, and religion, and politics, or you name it, I think got thrown out the window.

I opened every single one of my sessions going back to May with these rights, because I want everybody to know that they have a voice at this table. If you're angry, if you're frustrated, if you're claiming allyship, and that allyship comes across as performative versus authentic, you really need to go in a quiet time and ask yourself, why is this important to me?

As a Chief Diversity Officer, we're kind of the glue that brings it all together. There's no part of our organization that's immune to the work that we're doing. I have to get to know every single one of the 2,700 America's employees at Mizuho in order to do my job right. So, I think that that's super important from a Chief Diversity Officer perspective, is that you're touching every single aspect and every single part of the organization. Then I guess I'll start with this incredible momentum. Whether folks are doing this because they're scared or because they're woke, we've got incredible momentum right now. We just need to leverage the heck out of that. We've got folks saying, we need to do this, I'm not sure why we need to do it, but everybody else is doing it. Take it, and leverage it, and write it, and make it work. Let's do that.

As chief diversity officers, it's not the time to be quiet, and shy, and timid, and all of the above. It's really time to be bold and to push this thing forward. I'll just steal this from John Lewis, it's time to get into some good trouble.

From Allies to Co-Conspirators